The Triangle of the Monegros Desert

Many stories from the past tell about this region, some may be true, some may not. Witchcraft, strange events, appearances and disappearances.

Surely they will be things of the past, of those that the elderly invented to try to explain events that escaped understanding. But the truth is that this curious triangle located in the Monegros Desert has always caught my attention. What treasures will it hide? How many trails will it harbor in its entrails?

Its small population, its curious land formations (generated by the erosion of wind and water), the hostility of its meteorology and that I grew up right next to this place and that I know so little about it ... is what has led to join two of my passions in this adventure: motorcycles and bicycles. Can you think of a better way to explore a desert in search of good trails? 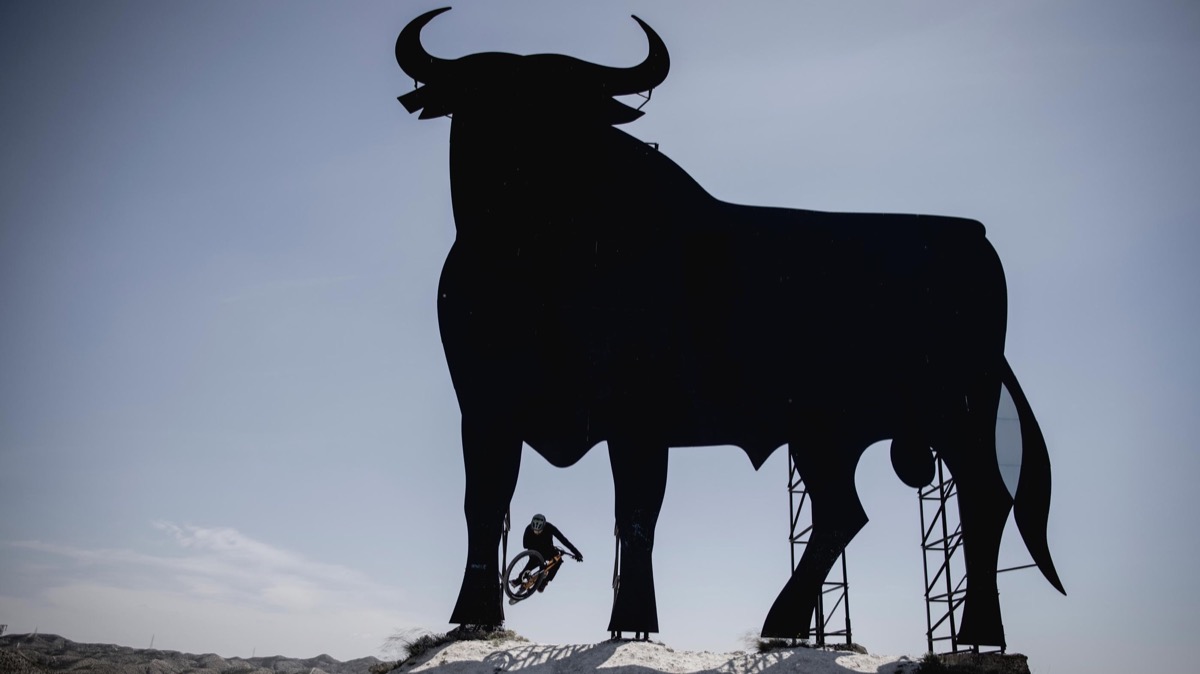 What better way to explore a desert than on a trail bike? My old BMW was full of dust, lately I hardly have time to go out with it, this could be the perfect opportunity to use it as an adventure companion, but… how could I take the bike with me? Initially I thought of taking it disassembled on my back, like a backpack ... but it was not a good idea, I had already tried it years ago to climb a Via Ferrata in Los Mallos de Riglos (Huesca) and although on that occasion everything went well, it was a hard experience . In addition, now he was going to be riding the bike for hours on roads and what a priori was a brilliant idea he was sure would end in tragedy. 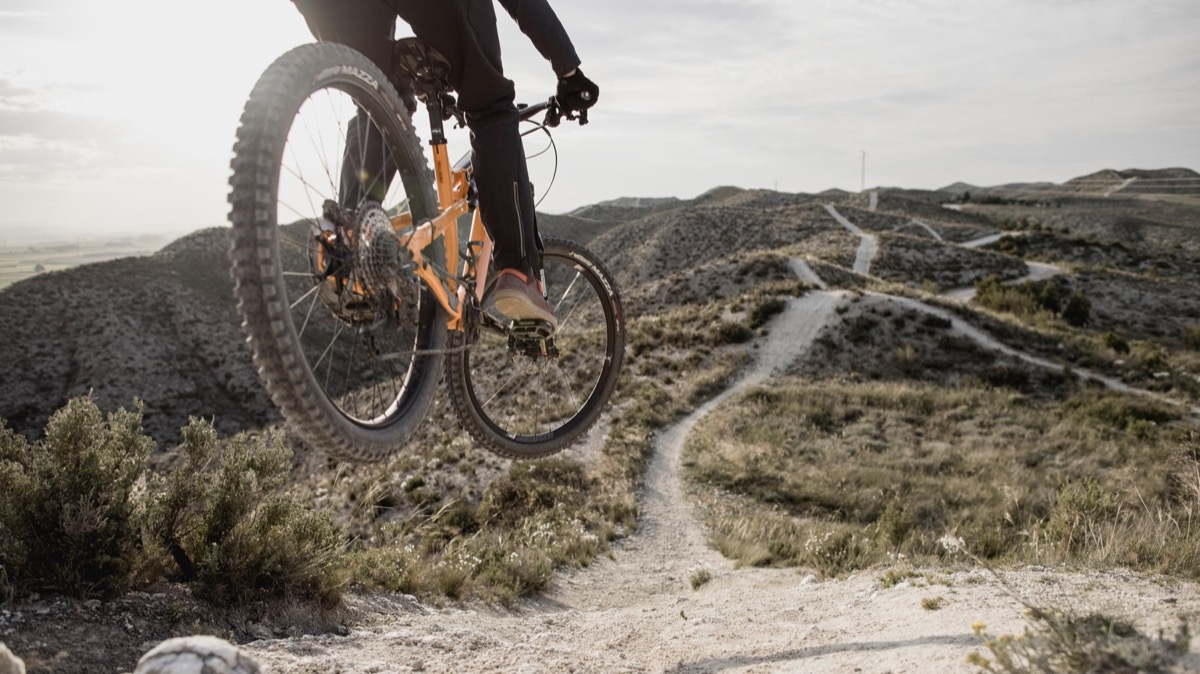 Some time ago I had seen a photograph on the internet, including a video of motorcycles carrying a kind of bike rack in the back. Of course, as you can imagine, all that material came from the USA, in Spain (unfortunately) and I imagine that in the rest of Europe, it is not possible to circulate with cargo that protrudes from the motorcycle (perhaps in some European country if it is possible , but I do not know).

But the truth is that it mattered little to me since my trip was going to be 100% Off-Road, 100% paths and 100% singleracks. So I got down to business and contacted the guys at 2x2 Cycles. Garret Blake, the founder of the company, was very kind and generous to me, he immediately offered his help when I told him about my idea. At 2 weeks he had my bike rack at home (despite supply problems due to the pandemic - COVID 19). Everything turned out very simple and fast.

The system is light and easy to assemble, in a few simple steps you have the bike on the bike and ready for adventure. 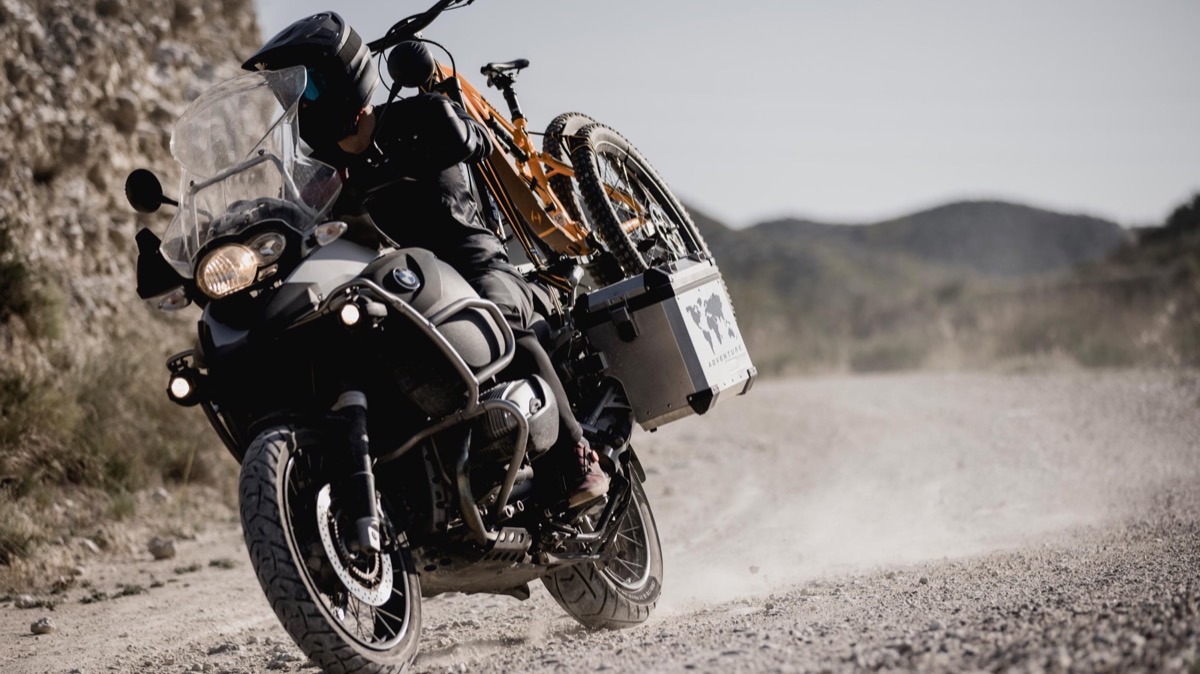 With the tank full, the bicycle loaded and the GPS with the route on the screen, this adventure began in Puebla de Alfinden, my base of operations for some years. From there the Monegros mountains begin, the scene of many films, electronic music festivals (Monegros Desert Festival) and mythical rallies such as Baja Aragón.

The first stop would be a few kilometers away, Alfajarin is a neighboring town to La Puebla de Alfinden, it hides a multitude of incredible trails that connect both villages and that not many people know, most of them have been produced by the passage of motorcycles Enduro, others for the runners fans in the area and of course, the rest of them for local bikers, who are many and as we would say around here: very "majos" (nice). 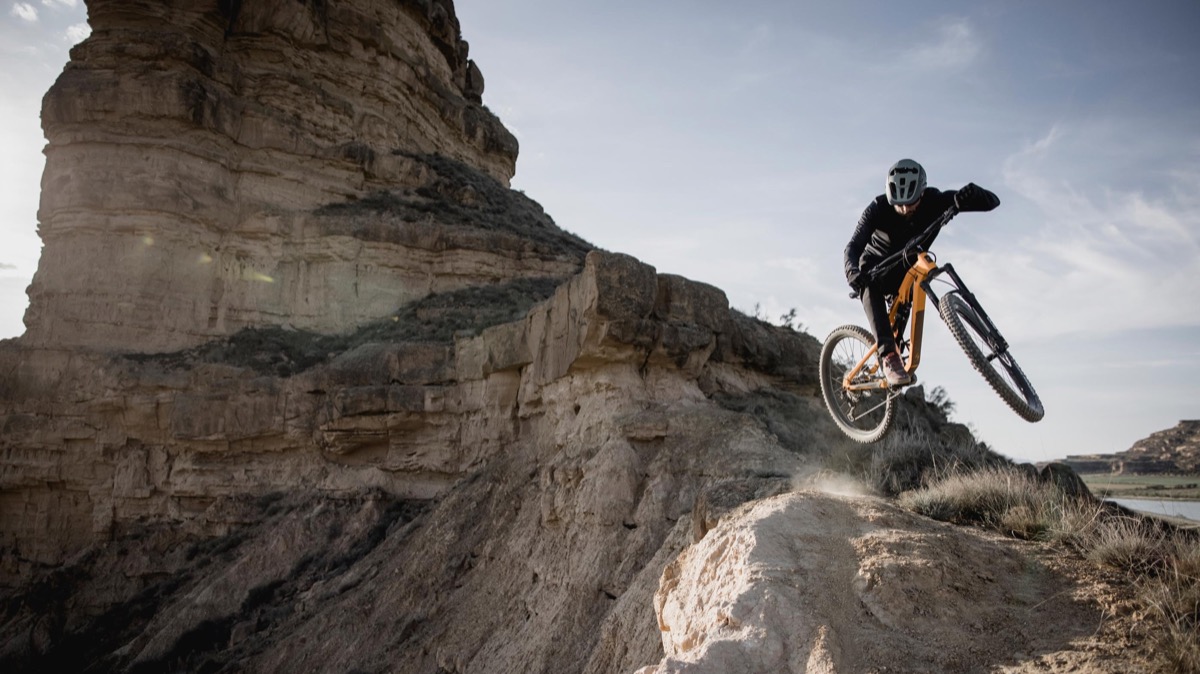 After crushing the Alfajarin area doing some of its most famous peaks and descents with my Enduro bike, I decided to head towards Farlete / Monegrillo / Castejón de Monegros. In a few kilometers the landscape changes a lot, the wide dirt tracks allow me to move forward with the BMW calmly. By the way, what a wonderful motorcycle is the BMW R1200 GS Adventure, those of you who have one or have tried it will know what I'm talking about, easy to drive, comfortable, reliable. The truth is that years ago I did not see myself on a motorcycle like that but now I am delighted.

From Castejón de Monegros I decide to give gas heading north, my destination is the surroundings of Cabañas. I have heard about some curious land formations called the Torrollones de Gabarda, simply spectacular, I recommend that you visit them, by motorcycle, by bike, with friends or family, as you like. It was not easy for me to find the trails in that area but I finally found them, some did not have much continuity and ended in authentic Freeride descents, but without a doubt the landscape and the experience were worth it.

Grañen would be my next destination, years ago it was the start of the well-known MTB Marathon race: Orbea Monegros. From there, many tracks pass and my idea was to use them to descend with the motorcycle towards the Sierra de Alcubierre and more specifically to another of my key points: Perdiguera.

This village has been one of my most visited local spots for years. As in the Alfajarin area, which I mentioned at the beginning, all its trails (which are many) have a source with the smell of gasoline, you understand me right? What would be of us if the guys on Enduro bikes They did not make the paths for us, although on other occasions they destroy them a little, but hey… it is what it is… if it weren't all perfect, right? Hahaha.

And my trip was coming to an end, the triangle was almost completed, the last stop could not be anywhere else than in Villamayor de Gállego, a village near the city of Zaragoza. There the guys from “Manitos Crew” and local riders have for years forged some of the best short trails in the area, jumps and natural slopes to bore. Although there is not much elevation gain, you could spend the whole day linking a tremendous up and down of hilarious trails.

The Monegros Desert Triangle was completed, I think I did not discover any unspeakable secrets, I did not meet any witch, nor did I see any flying UFO ... but I enjoyed the landscape a lot, riding my motorcycle through the desert tracks and riding my bicycle for the singletracks in the area.

V's for bikers and cycling greetings for those of you who pedal. See you on the trails friends.