Last year I finally bought a truck, something I’ve never had. With a SUV, I’ve always used a Yakima HoldUp and optionally a HoldUp +2 when I need to carry 4 bikes. On the pickup, that set up seemed very long and I was quickly looking for a different solution.

I naively tried a tailgate pad, but anyone with a late model F150 will know that the shape of the tailgate does not allow bikes to sit properly. Back to square one - when along comes an ad on my Instagram for VelociRAX. Being from Vancouver area, I’m familiar with the original vertical rack from the ‘North Shore’. It certainly was not on my list to buy as I’d seen my fair share of clapped out rusted racks on the back of vehicles and experienced first hand my crown anodizing being worn off in a single shuttle ride. But the VelociRAX appeared different. 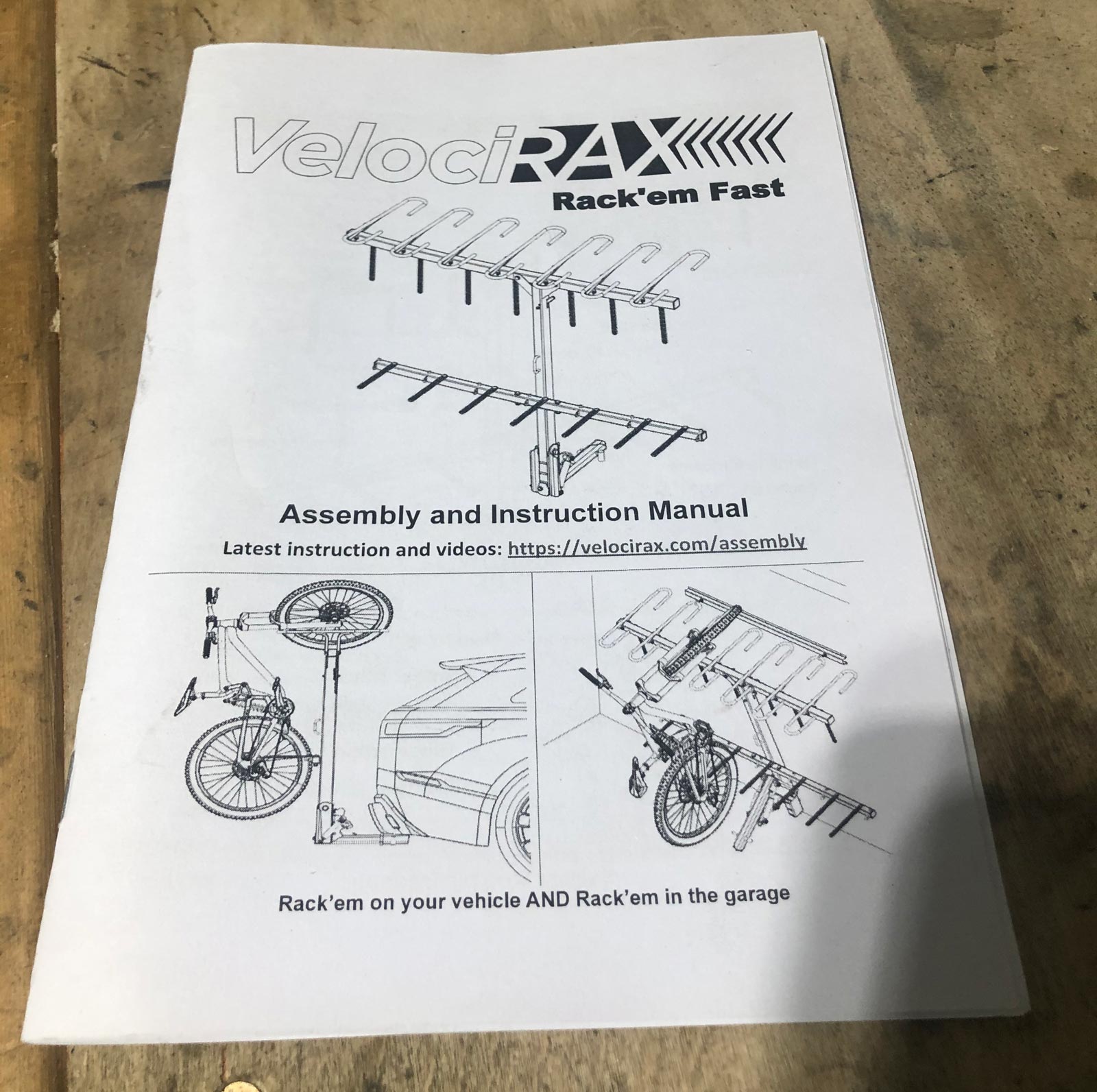 Firstly, the design of the VelociRAX utilizes angle front wheel catchers rather than hanging bikes by the crown. I’ve now seen this design style on a couple of manufacturers and it inherently makes more sense. I wondered about the finish, particularly the paint. The VelociRAX appears to to be powder coated rather than painted - which leads me to believe it will hold up better with use in Pacific Northwest winter. The rest of the hardware is top notch. And the straps are all high quality rubber - in lieu of cheaper rope and hook solutions I’ve seen on competitive systems. I picked up the rack myself from a local Canadian shipper, in Langley BC, without any fuss. For a small fee, the rack can also be shipped to you. The rack comes in 3 boxes for assembly. Putting together the 412 model - to hold 4 bikes - was straightforward and a 1 man job that took about 30 minutes in total. It’s actually quite easy to assembly the rack right on the back of your vehicle.

Let’s dive into some of the other features and benefits of this rack. Absolutely first and foremost, the VelociRAX caught my eye because of its gas strut assembly. A very clever design allows the rack to tilt backwards, lowered and raised with assistance of 2 small gas struts. Why is this so great? Well it allows the loading and unloading of bikes on the rack without having to lift them up and on! On my F150 4x4 with 33” tires the rack actually sits quite high - and oh boy does this tilting feature make it easy to load and unload the bikes! It would be a game changer for anyone smaller in size and having less strength to lift a bike vertically and load it,. And I think this is exactly what VelociRAX was solving when they engineered this feature. Additionally, with a single pin pulled, the rack can actually go down to horizontal behind the feature. This is a nice feature that allows more easy access to the back of the vehicle if you’re camping or parked for the day. I can personally attest to the tilt loading feature. A couple of times I was lazy and tried to simply load or unload my bike without tiling it down. It was a night and day difference when using the tilt feature.

What else? The mounting of the rack itself into a 2” receiver has a really nice feature to remove any potential rattling. It uses a quill type system (if you remember bike stems before threadless headsets) that essentially locks the rack into place. The only minor issue I had with this feature is that it made the rack ever so slightly crooked in relationship to the back of my truck. As an added bonus, a locking pin was included with the rack - this alone is worth about $50 to buy separately. VelociRAX uses thick rubber straps and metal buttons to hook on for the tire fixation. This system is far nicer than the cheaper nylon rope with a plastic end used with some other vertical rack manufacturers. The bikes felt very secure when strapped in.

I have a variety of bikes in the garage, both mountain bikes and road/gravel bikes. With the 412 model, I also liked the idea that the 4 bikes were spaced 12” apart (in lieu of the standard 10” on other models they sell) giving just a bit more room between bikes. For mountain bikes, I did not experience any bike interference at handlebars. However for gravel bikes side by side, I needed to put a sock over 1 shifter/brake hood as it was touching the bike beside it. This could have been due to the flared gravel handlebar but there was definitely some minor interference which could have turned into an ugly wear mark if left for a long drive. 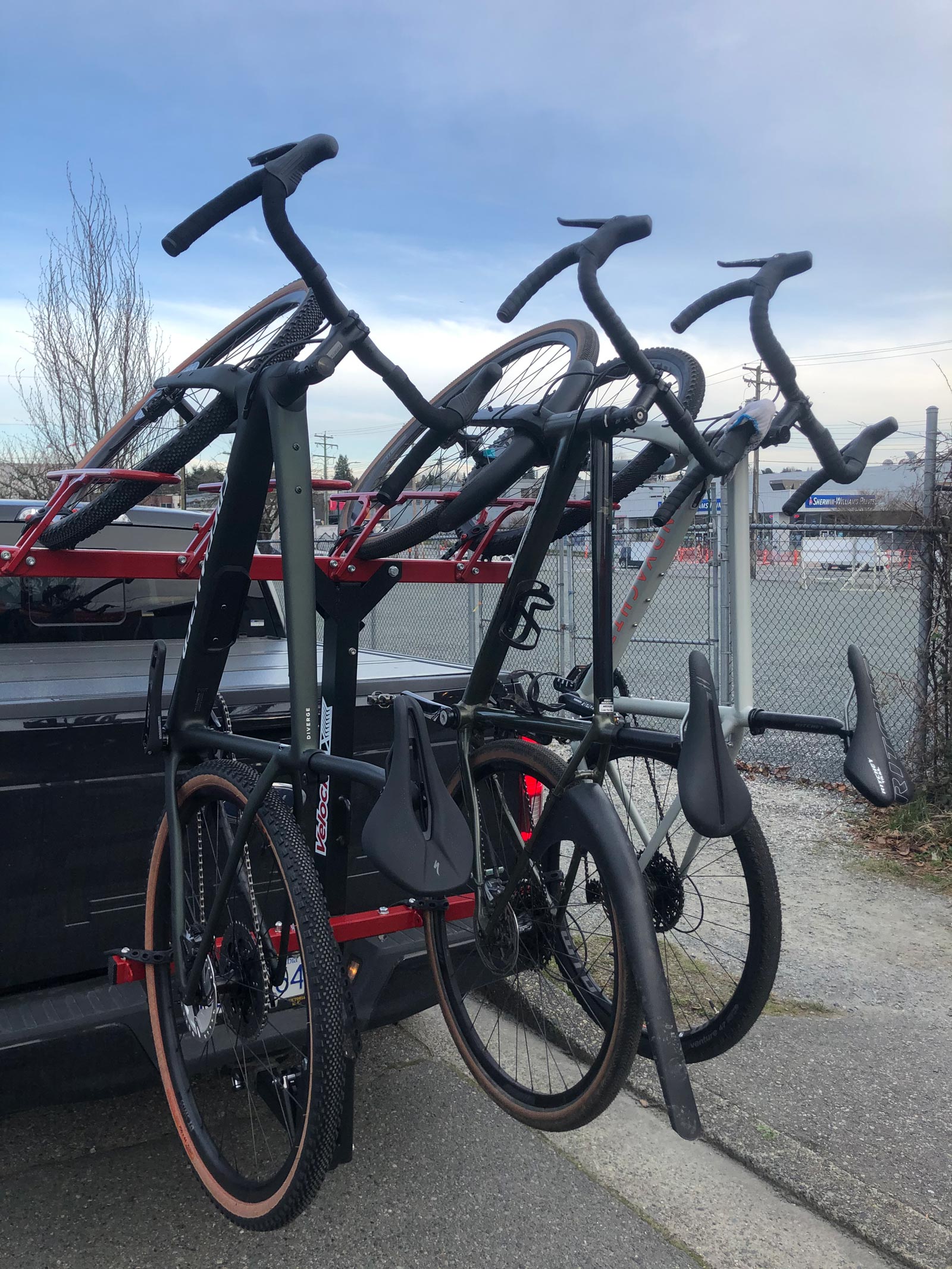 Getting the rack on and off my truck was also a bit of a PIA. I’ll sum this up by saying it’s probably a 2 man job if you don’t want to accidentally tip it into your vehicle or drop and scratch it on the ground. I didn’t set up the garage mounting wall hardware as I’m already very short for space in my garage. And I didn’t want to have to pull down 4 bikes if it was only me riding. But I do like the idea of providing a wall mount for this big rack. If you have the space, it certainly would get it out of the way.

Overall, I have been extremely pleased with the VelociRAX. At a $1000 price point for the 4 bike rack, it seems very good value to me in comparison to some other options on the market. The material quality is better than anything I have seen on any rack manufacturer. I have not had the chance to take it through multiple winters, but I have no reason to believe it won’t hold up and keep looking good. On their website, they also seem to have spare parts, including additional straps, matching paint, and additions for fat bikes. I think it’s obvious that a lot of thought went into the design and manufacturing of VelociRAX. They have made a high quality user friendly product.

Check them out at https://www.velocirax.com/ and be sure to click on Canada shopping cart if you’re north of 49.

Dale Tiessen is based in Whistler, BC. He is an avid cyclist and triathlete, coaches high performance cycling and is an ambassador to local bike shop Corsa Cycles.