Nothing like the wise words of a twelve year old to smack you in the face as you are getting ready to head out to the bike park.

"Well, i'm not racing, and just riding with you, so I don't really need it." I said back to mini-me.

"What about yesterday when you were riding without me?' he shot back, faster than I expected. Mental note: Don't brag about your Strava times to the boy again.

The truth was, I didn't have a good excuse as to why I wasn't wearing a chest protector.

When you look around the lift line maze at all the other riders, there aren't too many being worn. But that could just be the young bravado, riders whom haven't had a real crash yet.

What really sealed the deal for me was when I was speaking to an emergency room nurse, who said that the people who end up staying in the hospital instead of going home are usually the ones that have internal injuries. Now like anyone else that has put some time in the saddle, I've had my fair share of crashes, even a couple that required some time with surgeons to fix. I can't say I want that to happen again so maybe it's time to mitigate that risk.

So that was when I picked up a Leatt Chest Protector 3.5. The same model that my son has been wearing for the last two seasons. It's a hard shell chest/back protector, in the style of a MX roost protector, but with integration for a neck brace and designed as an impact protector with a CE level of one for the front and back, where as roost protectors are designed to protect from flying rocks. 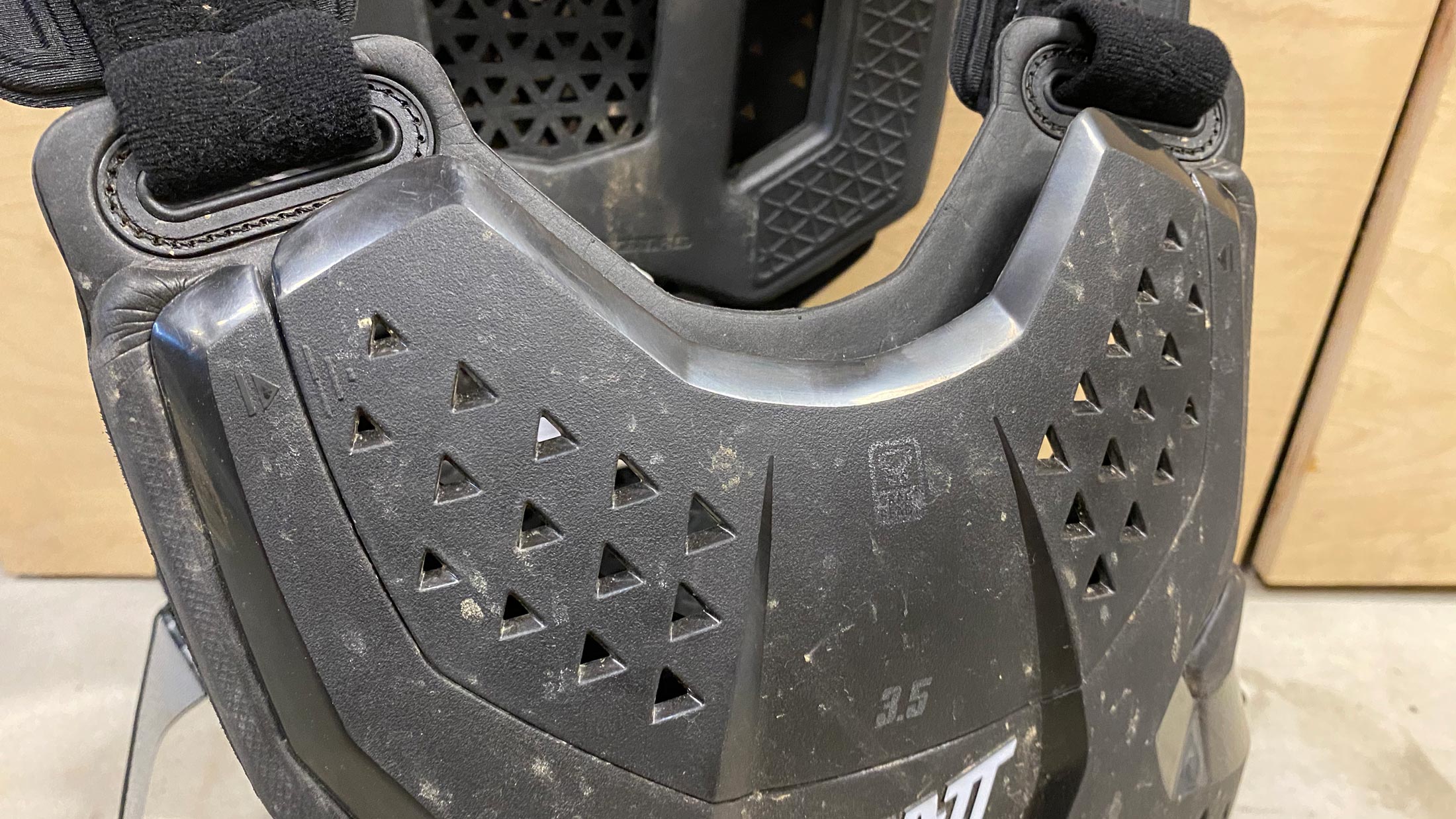 The front and back panels both have removable plates that can be snapped off so that the brace can sit tighter to your body. I have tried it with it on and off, but liked the look of it better with them attached. The only thing I noticed was it is harder to take off the neckbrace with the panels on, as the neck brace slips in between the body and the removable panel. 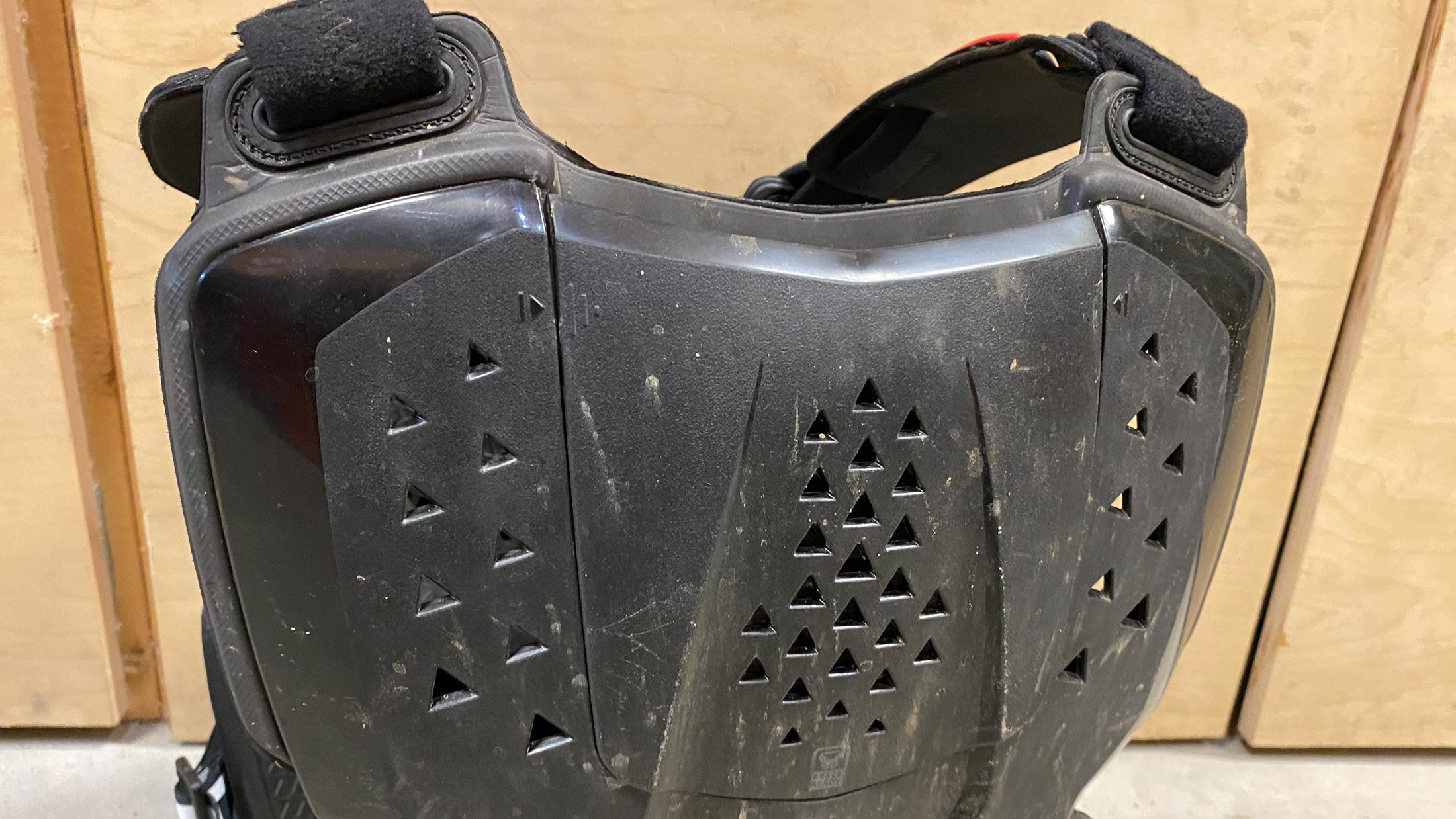 So for ease of use, take the panels off, for a more solid connection between the two pieces I decided to keep them on. But it does make me feel like a bit of a contortionist getting it off with both of them attached.

The inner side of the Chest Protector is lined with 3DR airfit soft impact foam, which gives it a nice finish, and extra protection when needed. It doesn't feel awkward, or bulky, it just fits nicely against my body and stays in place. Up top on the shoulder straps there are elastic loops on both sides that mate up with a Leatt Neck Brace tabs to keep it in place without having to use the chest strap.  Manufacturers claimed weight is 750 g (1.65 lbs) and I don't think that number is far off.  It really doesn't weigh on you when it's on.   it is currently offered in a single unisex fit, targeted for the 70 to 90 kg (154-198lbs) range.  I'm closer to 100kg than 90kg and I feel that it still fits well on my torso.

The two panels are held together with elastic straps that clip to the front with very secure snaps. Both sides can have the tension adjusted, and they haven't moved much on me since originally being adjusted. 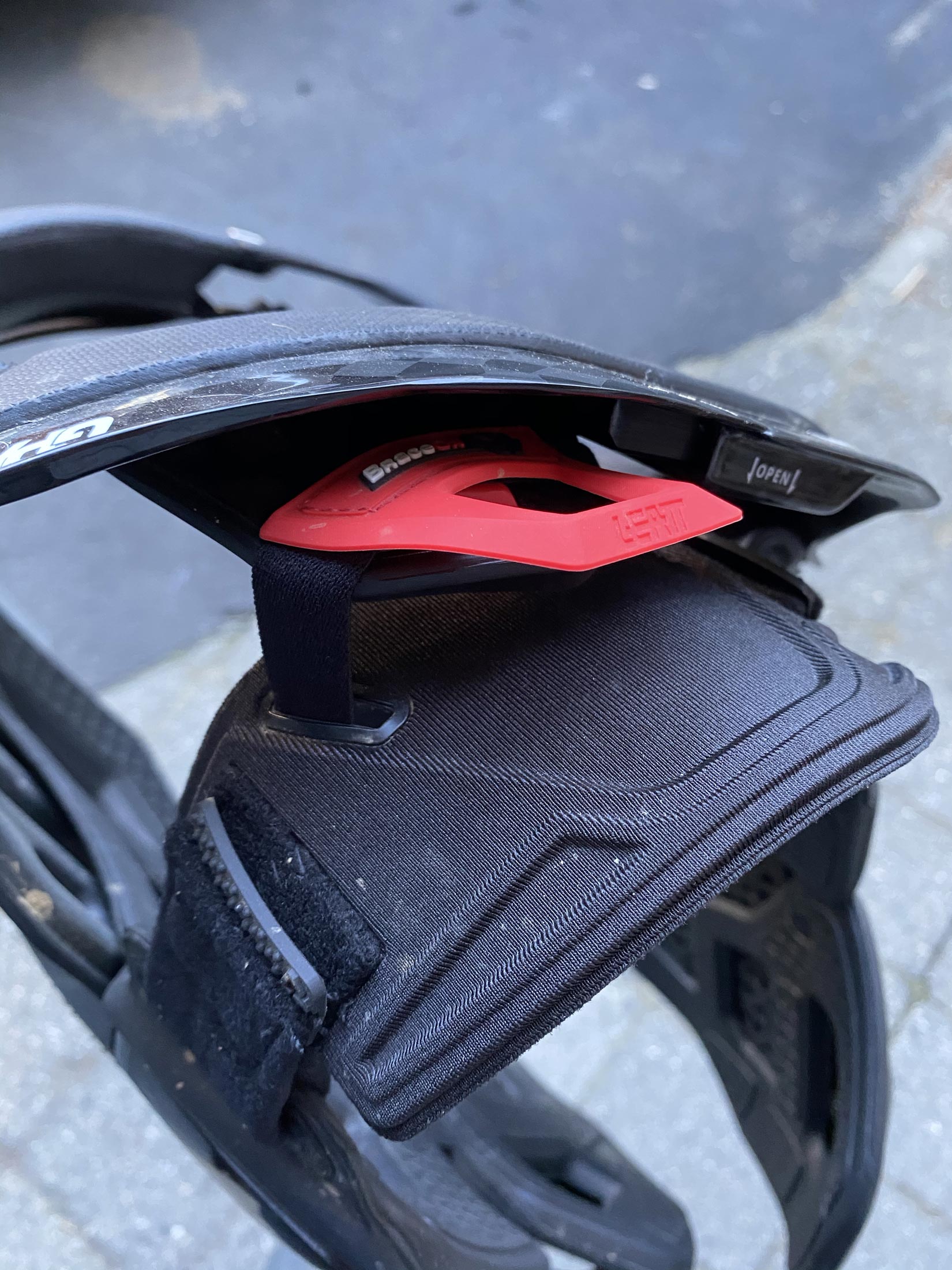 On the top of the shoulders there are elastic loops that mate up with Leatt Neck Braces to hold the two products together.  I found it to work very well, and didn't need to use the chest straps to keep it in place.

I managed to weave my way through the season without a major crash so I can't speak to how it would have protected me from injury, but the amount of comfort and confidence that I have had this year by wearing it has been well worth its weight in carbon.