If you’re like me, 2021 left you scrambling for a bike this spring. Having sold off my 2020 Santa Cruz Megatower, feeling it was a bit too much bike for me, I had settled on getting a more trail oriented bike for 2021.

Because I’m a middle-aged corporate-living guy, I am fully bought in to premium brands for bikes. Over the years, I have had great success with Santa Cruz’s VPP bikes, the proprietary features of Trek and the marketing machine of the ‘big S’. Alas, none of those options were available this year, but I had the opportunity to throw my leg over a brand new release of the Rocky Mountain Instinct. I’ve had a few Rocky Mountains over the past couple of decades, and I certainly like to support a local brand, but they also are not the coveted premium brand of some other bikes I was drooling over. However, the first major upside came when I found out the MSRP was $8369. This seems more than a few points cheaper than other premium brand options, potentially leaving me with some room for upgrades. Hmm, more on that to come.

Prior to getting my Instinct, I was ’secretly’ shown some specs on the upcoming release. The bike was essentially a trail version of the Altitude. In fact, it was the Altitude, with simply a different shock mount position and shock length. Otherwise the frame was identical. Bonus points here for Rocky Mountain, in designing a frame layup that could span two models. This is smart, brings down cost to manufacture, and should also provide better replacement frame part options. I liked the idea of a toned down Altitude, as I was seeking an all day Sea to Sky trail beast. Something that would work with me on the long climbs and yet not against me on the big descents. Then Rocky Mountain sponsored a demo day in Squamish and I got to ride both the Altitude and the Instinct back to back. Definitely there was similarity to the bikes. On the saddle, the cockpit feel was almost identical. It was hardly perceptible the slightly more upright and forward position of the Instinct climbing and conversely the lay back and slackness of the Altitude descending. OK, this was getting better and better. Then the local Rocky Mountain rep whispered a new word into my ear - Instatude. What’s an Instatude? Well it’s a 2021 Instinct BC Edition kind of idea. Technically, it’s an Instinct with the rear shock spacer removed, increasing travel to 146mm, combined with a fork air shock upgrade from 150 to 160mm. Thus the Instatude splits the difference between an Instinct and an Altitude, as a 146/160mm trail bike. Could it be? Could this be the magical place I was seeking - a big day, solid and comfortable climbing bike that I could also throw into Crankworx EWS and not feel out of place?

My Instinct model is the C70. Right off the bat, this is a great spec’d bike. While I’m generally happy with SRAM on bikes, I am not secretively a fanboy of Shimano. The C70 comes as a fully XT equipped ride, shifter, derailleur, cranks, cassette/chain, brakes. Nice. What else did I like out of the box? RaceFace Turbine R dropper, Maxxis tires, and even higher end spec Ergon grips. What did I hum and hah about? Well given that I mentioned the initial price tag was a bit less than expected, I decided to build myself a true (Built In) BC Edition Instinct. I upgrades the RaceFace AR30 (with DT 370 rear and no name front hubs) wheel set with a We Are One Composites carbon wheel set. As a custom build, I spec’d the Union rims with their Industry 9 Hydra hubs along with Sapim CX-Ray spokes. This is really their top shelf spec with a 30mm internal diameter rim built for compliance mated to a rear hub with 690 points of engagement. Next came the cockpit. It was almost as Rocky left this a bit low on spec, noting how many serious riders would upgrade to a personal preference or colour way. In keeping with the (Built In) BC Edition, I swapped in a One Up carbon bar that I was keen to try because of its oval shape, which is intended to provide more vertical compliance for reduced arm fatigue. The stem was swapped with the new North Shore Billet Overlord stem, of course matching sliver ano to my I9 Hydras. The last major upgrade was the Fox 36 damper. While the rear shock spec was a DPX2 Performance Elite giving you everything but the Kashima, the Fox 36 was spec’d with the Fit4 damper. I do understand the constraints of building a bike to a price point, but I might have put SLX brakes or a lower spec crank on the C70 in order to deliver the bike with the Grip2 damper. A simple swap and I was up and running with a new Grip2 damper, with both high speed and low speed compression and rebound settings. 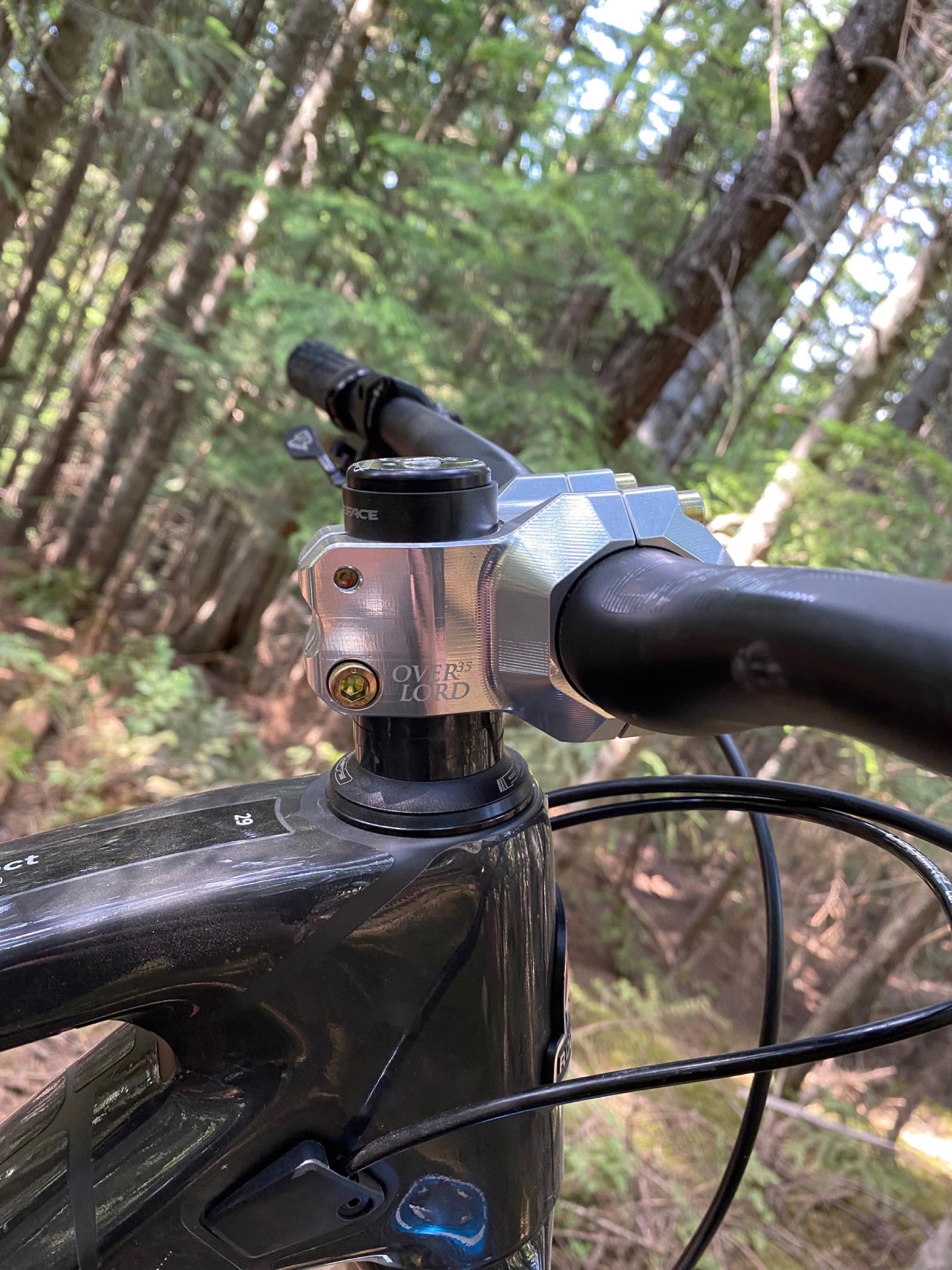 This is my (Built In) BC Edition Instatude. Now with a MSRP price point north of $10000 but hey who’s counting?

So now how does this all ride? Well I should also mention the Instinct comes with a huge amount of adjustability. This is seemingly more common in bikes now. I’m not sure whether to applaud this, or to scold manufacturers for not getting it ‘right’ of the box and having to provide adjustability options. At any rate, the Ride9 technology on the shock mount provides some minor adjustability - but really let’s say you can have lower/slacker or higher/steeper to keep things simple. And then the rear end has 10mm wheelbase adjustability. I actually like this feature (and had it on my MegaTower) save for the fact that in the Instinct implementation it requires a proprietary derailleur hanger for the short setting (in lieu of the newer and far better UDH in longer setting). The Instinct ride is predictable. I say this in a good way. Well by now, if engineers have not nearly perfected ‘Horst Link’ after 2 decades then shame on them. But the Rocky engineers have delivered a great example of the 4 bar suspension. As I said, the ride is predictable. The Instinct maintains a high position while climbing - enough that on multiple 1 hour plus climbs to Dark Crystal I forgot the rear shock in open mode. And also predicable on the downhill. The bike settles into trail in a way that inspires confidence to move fast without wondering how the bike with react. Rocky claims a more controlled end stroke. I didn’t feel this, but maybe that’s exactly how it is supposed to work and I shouldn’t feel it. It has certainly been nice to dial in my fork settings and I’m taking advantage of the Grip2 damper. Between the bar and wheels, I do feel like the bike is less harsh on the local Whistler, Pemberton and Squamish rocky and rooty trails. The XT shifting and brakes have been flawless to date - and I definitely love the feel of the ServoWave on the Shimano brakes.

So where does this review end and what did it give you? If you’re asking what the ride will be like out of the box on a new 2021 Instinct, I probably cannot tell you. If you’re thinking about the Instinct or maybe even an Altitude and then also considering some customization then maybe this review is for you. Also, if you are an ardent supporter of BC brands, then this bikes includes Rocky Mountain, RaceFace, OneUp, We Are One and North Shore Billet to give you some ideas on what a (Built In) BC Edition bike may look like. As I write this review, it has made me think about the option of some other brands like Santa Cruz to factory order wheel upgrades to carbon. I think this would be a great idea for Rocky Mountain, and they could spec either RaceFace for historical reasons or We Are One. If I see you out on the trails, I’m always happy to pull aside and chat about bikes. I am now sufficiently stoked on my Instatude to talk almost all day about it. If only now we could get EWS back to Whistler…

Dale Tiessen is an ambassador for Corsa Cycles in Squamish BC. He lives in Whistler and rides lots of bikes. He actually holds a Masters degree in cycling biomechanics and continues to fuddle about in cycling by coaching for TaG Cycling, as the Race Director for Whistler X Triathlon and a semi-competitive racer himself.