Sam Hill was flat out on flat pedals. Ravanel wins by over 30 seconds.

The seventh round of the Enduro World Series will be remembered as the race where Sam Hill earned his enduro stripes.

In a race that promised drama from the start thanks to an apocalyptic weather forecast, forcing the cancellation of the prologue on Friday and stage two on Saturday, the stage was set for an epic showdown. The promised storms never emerged but even with the cancelled stages, riders faced a huge day on Saturday featuring 1600m of climbing and 2500m of descent over 51 km.

But in the end the Enduro des Portes du Mercantour driven by Urge Bike Products came down to a fierce battle between two legends of mountain biking - Sam Hill (Chain Reaction Cycles Paypal) and Nico Vouilloz (Lapierre Gravity Republic). The pair fought it out over seven stages amongst the iconic trails of the Maritime Alps, all whilst being chased down by young Jesse Melamed of Rocky Mountain Urge bp. However, Hill proved too strong for both and crossed the line nine seconds clear, forcing Vouilloz to settle for second and Melamed third.

Speaking after the race, Sam said: “It feels awesome. I tried not to think about my lead all day and just attack each stage as it came. Nico kept me honest all day, I knew I had a little lead and so I just tried to get down without any mistakes. It’s been a massive goal of mine to win one of these races, so to win one already is awesome.”

In the women’s race Cecile Ravanel (Commencal Vallnord Enduro) continued her dominance - winning four of the seven stages. Isabeau Courdurier (SUNN) won three stages, but it wasn’t enough to overcome Ravanel and she finished over 30 seconds back. Ines Thoma (Canyon Factory Enduro Team) rounded out the podium in third. 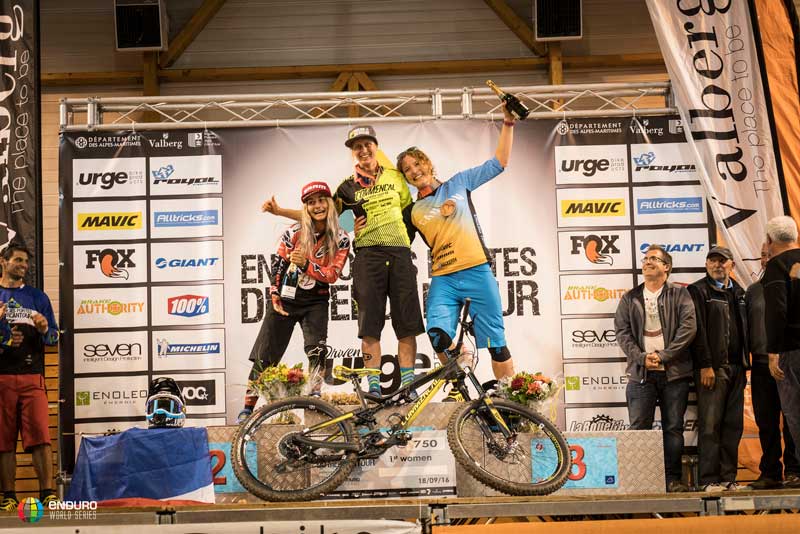 Cecile said: “I’m really happy to win and to race this type of event. This course was good because it used all the formats; pedal liaisons, chair lifts and the stages were all so different - some long, some short and that’s what I like.”

In the U21 Men’s race Adrien Dailly (Lapierre Gravity Republic) won - meaning he and Sebastien Claquin (Rocky Mountain Urge bp) are now tied on points in the series rankings. Technically Dailly leads the series as he’s won the most recent race, but these two will be fighting it our for the World Champion title in Italy in a couple of weeks time. Elliot Trabac (Scott SR Suntour Enduro Team) rounded out an all French podium in third.

The series now turns its attention to the last race of the year in the beautiful Finale Ligure. The Bluegrass Finale Enduro powered by SRAM takes place on October 1st and 2nd, where the 2016 Enduro World Champions will be crowned on the shores of the Mediterranean.